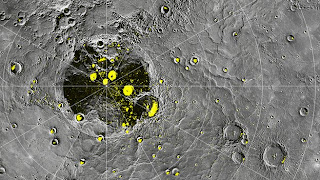 Whatever these anomalies are, they are proof that refugia exist on Mercury that can certainly house a base for exploration of the planet itself.

Another issue is also addressed here in that Mercury has a magnetic field while Venus and Mars does not.  The weakness of Mars field appears to derive from large impacts that likely welded the crust to the core and has yet to be renewed if it ever will be.  In other work I have argued that Venus lacks a field simply because it has not had the time to set up- properly.

Mercury is a little larger than our moon but twice as dense which suggests that it shed its light material upon creation.  I imagine if we could combine the mass of Mercury and the Asteroid belt, we would have another planet near Earth size in an orbit close to that of Venus.  Of course it is possible that Mercury would also make a handy core for Mars.

My bottom line is that it is possible to imagine an inner solar system populated with a number of Earth Sized planets far more than we presently have in place.  I wonder if the effort has already begun?

Mercury poles give up hints of water ice

The radar-bright patches line up perfectly with areas of permanent shadow
2 March 2012 Last updated at 01:09 ET

A Nasa spacecraft has found further tantalising evidence for the existence of water ice at Mercury's poles.

Though surface temperatures can soar above 400C, some craters at Mercury's poles are permanently in shadow, turning them into so-called cold traps.

Previous work has revealed patches near Mercury's poles that strongly reflect radar - a characteristic of ice.

Now, the Messenger probe has shown that these "radar-bright" patchesline up precisely with the shadowed craters.

Messenger is only the second spacecraft - after Mariner 10 in the 1970s - to have visited the innermost planet. Until Messenger arrived, large swathes of Mercury's surface had never been mapped.

The bright patches were detected by ground-based radio telescopes in the 1990s, but as co-author Dr Nancy Chabot explained, "we've never had the imagery available before to see the surface where these radar-bright features are located."

The researchers superimposed observations of radar bright patches by the Observatory on the latest photos of Mercury's poles taken by the MDIS imaging instrument aboard Messenger.

Mercury was visited first by the Mariner 10 probe in the 1970s; and by Messenger currently

The planet's diameter is 4,880km - about one-third the size of Earth

It is the second densest planet in Solar System; 5.3 times that of water

The is the largest known feature (1,300km in diameter)

It is an extreme place: surface temperatures swing between 425C and -180C

"Near Mercury's north pole such deposits are also seen only in shadowed regions, results consistent with the water-ice hypothesis."

However, she cautions, this does not constitute proof, and for many craters, icy deposits would need to be covered by a thin layer (10-20cm) of insulating debris in order to remain stable.

Maria Zuber, from the Massachusetts Institute of Technology (MIT), who is a co-investigator on the Messenger mission, told BBC News: "The most interesting interpretation of [the radar observations] is that they were due to water ice.

" had been proposed, there had also been some suggestion it was roughness - though there was no reason craters at the poles should be rougher than those at low latitudes."

"The new data from Messenger... is strengthening the evidence that there is some sort of volatile there, and water-ice seems quite likely."

She said information from several instruments on Messenger was currently being analysed in order to answer the ice conundrum: "I think this is a question that we can come to a definitive answer on, as opposed to 'we think it may be this'," the MIT researcher explained.

On Wednesday, scientists from the Messenger mission published findings that Mercury had been geologically active for a long period in its history.

Data from the probe shows that impact craters on the planet's surface were distorted by some geological process after they formed.

The findings, reported in Science magazine, challenge long-held views about the closest world to the Sun.

Scientists also presented a new model of Mercury's internal structure, which suggests the planet's huge inner core is encased in a shell of iron sulphide - a situation not seen on any other planet.

Messenger was launched in 2004, and entered orbit around its target in March last year. Nasa recently announced that its mission would be extended until 2013.
Posted by arclein at 12:01 AM