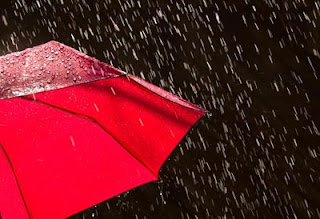 The surprise here is that the friction produced by falling raindrops is a source of energy release equivalent to the associated wind turbulence and can not be ignored as one is inclined to do.

One only has to step out into the weather of a hot day and look for relief from a thundercloud to understand the reality of the atmospheric heat engine.  A tornado is merely a more exciting demonstration.

We now know that forty percent of the contained energy is released through drag as the rain descends.

Rain drains energy from the atmosphere

When it comes to dissipating energy in the atmosphere, the humble raindrop punches way above its weight. Researchers in the have shown that the energy lost as heat by falling liquid water and ice particles is on par with the energy that the wind loses to friction. The team suggests that with the increasing precipitation expected as a result of global warming, the energy sunk into rainfall could reduce the amount available to generate winds.

Many climate physicists view the atmosphere as a giant heat engine that drives a wind and water cycle. The Sun warms the Earth's surface, creating the hot part of the engine with an average temperature of 288 K, and the atmosphere does work by lifting water vapour towards the engine's cold side, about 15 km up with an average temperature of 255 K. Taking the atmosphere's inefficiencies into account, Olivier Pauluis of New York University and Juliana Diasof the National Oceanic and Atmospheric Administration in Boulder, Colorado estimate the total power per unit of surface area of the engine to be 5 Wm–2.

The rising water vapour then cools, condenses and falls as water or ice. Without slowing from the atmosphere, rain would hit the ground at a few hundred kilometres per hour. "You would need to buy a new umbrella," says Pauluis. Luckily, the atmosphere dissipates most of that energy in microturbulence around the water droplets, keeping their speed at a gentle few kilometres per hour.

On par with the wind

Since kinetic energy doesn't accumulate in the atmosphere, Pauluis and Dias argue that the total power of its heat engine is roughly the sum of the rate of energy loss due to air-on-air friction in the winds plus rate of energy dissipation from the rain. The wind alone is estimated to disperse between 1–5 Wm–2, and the pair undertook the first analysis to discover the dissipation due to rainfall. Finding it to be about 1.8 Wm–2 on average, they showed that energy loss due to precipitation is as important as the loss due to friction in winds.

Erich Becker of the Leibniz-Institute of Atmospheric Physics in Kühlungsborn, Germany, calls the study "ingenious". To his knowledge, he says, "nobody has thought before about this frictional heating due to rainfall".

Pauluis and Dias used data gathered by the Tropical Rainfall Measuring Mission (TRMM), a satellite that spots water and ice particles by bouncing radio waves off them. It looks at six different layers of sky – just above the ground and then 2, 4, 6 10 and 15 km from the Earth's surface. The reflected waves tell the researchers the size and concentration of the raindrops. The size of the droplets indicates their maximum freefall speed, which in turn gives the drag force required to maintain that speed. By factoring in the distances that the raindrops fall, the pair could work out the total energy dissipated by the drag on precipitation.

Naturally, the local energy lost to rainfall friction is closely tied to the amount of precipitation that the region receives, though Pauluis says the patterns showed interesting features. "To be precise, there is more dissipation over continents than over the ocean," he says, which is consistent with the fact that convection is stronger over the continents, driving water to greater heights.

Climate models predict that as the temperature of the Earth rises, the amount of precipitation and the height from which it falls will increase as well. This means the atmosphere would expend more energy lifting water vapour, and that could leave less energy for driving the circulation of air around the planet, says Pauluis.

From Becker's point of view, the study's key contribution to the field is that it highlights significant source of entropy, or disorder, which was previously ignored. The atmosphere's tendency to absorb and emit heat unevenly – more comes in at the tropics and leaves at the poles – reduces its entropy. Part of that entropy is made up by the turbulence of the wind, he explains, but the contribution of the rain is equally important and was missing until now. While neither Becker nor Dargan Frierson of the of , , believe that this adjustment to the climate models will have a major impact on climate change predictions, Becker says, "It's certainly worthwhile to take it into account."

Frierson instead emphasises the fundamental side of the result. He points out that water vapour makes up just 1% of the atmosphere's mass, while liquid water and ice particles in clouds are a much smaller portion – more like 0.01%. "And it turns out that just around that fraction of falling liquid and ice particles, that's where much of the friction is dissipated in the atmosphere," he says. "That, to me, is quite remarkable."
This research is published in Science 335 953.

Kate McAlpine is a science writer based in the UK