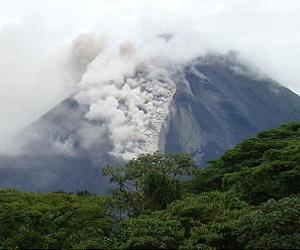 I think that tree ring data must always be compared as much as possible to similar sources, nearby and also far away in order to determine if there are any possible gaps.  However, I am skeptical about a significant loss.  A year or two maybe, and perhaps in the lee of the erupting volcano, a pause of several years could occur. After that if not long before, the tree is just as likely to expire.

Besides, the actual proxies happen to be always a long ways away and wind variability will open plenty of growth spurts.  Thus tree ring accuracy should be around plus or minus five years at most for a continuous record.  Since nothing else provides anything like such a record, except humanity sometimes and then only recently, it is an error to worry about it much.

Thus we can quote the Hekla Blast ending the European Bronze Age at 1159BC and expect to err by as little as a couple of years.  Yet the Thera Blast is more difficult because we do not have a good tree ring record to work with, although that is not impossible as we keep digging.  There has to be a formally living tree there some where that was old enough to provide a great sequence.  In the meantime 1450BC plus or minus around fifty years is as good as we have.

With the great Pyramid we are using 2450BC with a century either way to play with.

I will suggest though, that further tree ring work in northern bogs may help, and perhaps we can find a way to produce a Mediterranean sequence, because enough samples exist to actual pin down exact dates if that could be done.  It will take a lot of work but well worth while, because fixing those dates exactly ax I can do with 1159BC is extremely valuable.

From that I know from the contained astronomy in the Iliad that the sky described was around 1177BC or a generation before.  It is reasonable that we can pin down other key dates from this era as well.

One thing that should have long been obvious is that the world described in the Iliad is not the of the high Bronze Age. That Aegean had large towns and an active trade with to start with, none of which shows up at all.  Try imagining the Bible without mention of .  We have major trade coming through the even then and everything that goes with that.  My point is that the tale of the Iliad has none of this background story at all.  This is very much the tale of the dog that did not bark.

Instead, if we place that story in the Baltic as DiVinci does in his recent book of around five years ago, this problem disappears and the rest also falls nicely into place.  This is not the place to run through the textual evidence and all that but I have posted on this in the past so google Divinci on this blog.

"We know these tree rings capture most temperature changes quite well," said Michael Mann, professor of meteorology and geosciences and director of the .

Tree rings are used as proxies for climate because trees create unique rings each year that often reflect the weather conditions that influenced the growing season that year. For reconstructing climate conditions, tree-ring researchers seek trees growing at the extremes of their growth range. Inferring temperature changes required going to locations either at the tree line caused by elevation or at the boreal tree line, the northern most place where the trees will grow.

For these trees, growth is almost entirely controlled by temperature, rather than precipitation, soil nutrients or sunlight, yielding a good proxy record of surface temperature changes.

"The problem is that these trees are so close to the threshold for growth, that if the temperature drops just a couple of degrees, there is little or no growth and a loss of sensitivity to any further cooling. In extreme cases, there may be no growth ring at all," said Mann. "If no ring was formed in a given year, that creates a further complication, introducing an error in the chronology established by counting rings back in time."

The researchers compared temperature reconstructions from actual tree-ring data with temperature estimates from climate models driven with past volcanic eruptions.

Comparing the model-simulated temperatures to the Northern Hemisphere temperatures reconstructed from tree-ring thickness, Mann, working with Jose D. Fuentes, professor of meteorology, , and Scott Rutherford, associate professor of environmental science, , found the overall level of agreement to be quite good.

However, they report in the current issue of Nature Geoscience that "there is one glaring inconsistency; the response to the three largest tropical eruptions - AD 1258/1259, 1452/1453 and the 1809+1815 double pulse of eruptions - is sharply reduced in the reconstruction."

Following the 1258 eruption, the climate model simulations predict a drop of 3.5 degrees Fahrenheit, but the tree ring-based reconstruction shows only about a 1 degree Fahrenheit dip and the dip occurs several years too late. The other large eruptions showed the same type of discrepancy.

Using a theoretical model of tree-growth driven by the simulated temperature changes, the team determined that the cooling response recorded by the trees after a volcanic eruption was limited by biological growth effects. Any temperature drop exceeding roughly 1 degree Fahrenheit would lead to minimal tree growth and an inability of trees to record any further cooling. When growth is minimal enough, it is likely that a ring will not be detectable for that year.

The potential absence of rings in the first one to three years following eruption further degrades the temperature reconstruction. Because tree-ring information is averaged across many locations to obtain a representative estimate of northern hemisphere temperature, tree-ring records with and without missing rings for a given year are merged, leading to a smearing and reduced and delayed apparent cooling.

The researchers also noted that aerosol particles forced into the air by volcanoes block some direct sunlight causing cooling and they produce more indirect, scattered light at the surface. Trees like indirect sunlight and grow better under those conditions. However, this effect is small compared to that of lower temperatures and shorter growing seasons.

By accounting for these various effects in the tree growth model, the researchers were able to reproduce the reduced and smeared cooling seen in the actual tree-ring temperature reconstruction, including the near absence - and delay - of cooling following the massive 1258 eruption.

"Scientists look at the past response of the climate to natural factors like volcanoes to better understand how sensitive Earth's climate might be to the human impact of increasing greenhouse gas concentrations," said Mann. "Our findings suggest that past studies using tree-ring data to infer this sensitivity have likely underestimated it."