Time to Give SETI a Chance? 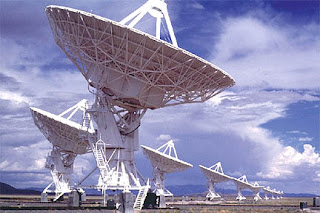 I actually have little hope that SETI will accomplish anything.  My reasoning is that a civilization makes radio noise for only a brief period of time after which it shuts down.  So not only are we looking for a clear needle in a haystack, that needle only signals for a moment through vast eons of time.

I have seen enough to consider the direct use of worm holes as a pending practical solution to both information and energy transmission.  It has gone from a plausible theoretical possibility to an empirically indicated reality in which expected behavior is been replicated.

The moment we do worm holes, all that noise goes away as a total waste of energy and general effort.

I suspect we are a decade away from going off the air.

Time to give SETI a chance

Earth 2.0 is in our sights. Checking it for signs of life will be the next big issue

THE thousands of probable worlds discovered in orbit around other stars are making our corner of the universe appear a lot friendlier to life these days.

The Kepler space telescope, which has its eye on 150,000 stars, is beginning to home in on Earth-size planets. Can Earth 2.0 be far behind? What will it be like?

Earth 2.0 would be a rocky planet the size of our own, orbiting a star like the sun at a distance where the surface temperatures would allow liquid water oceans, assuming the planet was sheathed in an atmosphere containing greenhouse gases.

In other words, it will be a world that we might find habitable. We won't be able to see this other Earth directly, but we will know it is there because of the influence it has on its star. Even so, we will inevitably ask: "Is it inhabited?"

Answering that question will be hard. It is quite probable that Earth 2.0 will be hundreds or even thousands of light years away; too far from us to detect trace chemical "biosignatures" that would suggest life.

There is another way. We could look for life on Earth 2.0 via "technosignatures" such as radio signals produced by intelligent life. These would be cheaper and easier to find than biosignatures. It is a long shot, but one that is affordable and we can do it now. In fact the Search for Extraterrestrial Intelligence (SETI) has been on the case since the 1990s.
Despite being denied public funds and derided by some politicians for seeking "little green men", SETI still carries out searches with private money.

For decades we have blindly checked the sky overhead or targeted stars that are old enough, metallic enough and stable enough to have rocky planets in the right orbits. Now, thanks to Kepler, we know where to look. Digital technologies are speeding up the searches, but they require investment to reap the rewards.

SETI is a logical addition to the publicly funded endeavours exploring other worlds. It is time to fund it properly, either with public money or privately.

Now that we know there are planets beyond our solar system, and where to find them, we should give SETI a fighting chance to see if anybody is home.

Jill Tarter is director of the Center for SETI Research at the SETI Institute in Mountain View, California