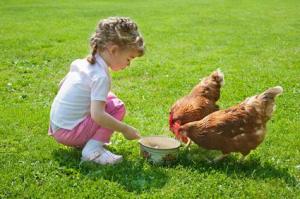 There has been plenty of suspicion that low exposure early in life was a significant risk factor for the development of allergic response later.  This work generally confirms this position.

Since we are unlikely to see any acceptance of this protocol among mothers brought up to be anti germicidal, it will be necessary to figure out how to induce the desired result otherwise, which I think may well be within reach.

Otherwise, spend time with the young out in the park every day for an hour or so and let them get dirty and all that.

Growing Up On a Farm Directly Affects Regulation of the Immune System, Study Finds

ScienceDaily (Feb. 8, 2012) — Immunological diseases, such as eczema and asthma, are on the increase in westernised society and represent a major challenge for 21st century medicine.

A new study has shown, for the first time, that growing up on a farm directly affects the regulation of the immune system and causes a reduction in the immunological responses to food proteins.

The research, led by the of 's , found that spending early life in a complex farm environment increased the number of regulatory T-lymphocytes, the cells that damp down the immune system and limit immune responses.

Dr Marie Lewis, Research Associate in Infection and Immunity at the School of Veterinary Sciences, who led the research, said: "Many large-scale epidemiological studies have suggested that growing up on a farm is linked to a reduced likelihood of developing allergic disease. However, until now, it has not been possible to demonstrate direct cause and effect: does the farm environment actively protect against allergies, or are allergy-prone families unlikely to live on farms?"

In the study, piglets were nursed by their mothers on a farm while their siblings spent their early life (from one day onwards) in an isolator unit under very hygienic conditions and were fed formula milk, therefore, reflecting the extremes of environment human babies are raised in.

The work was carried out in piglets as they are valuable translational models for humans since they share many aspects of physiology, metabolism, genetics and immunity.

The researchers demonstrated that compared to their brothers and sisters in the isolator, the farm-reared piglets had reduced overall numbers of T-lymphocytes, the immune cells which drive immune responses, in their intestinal tissues. Importantly, these dirty piglets also had significantly increased numbers of a subset of these cells, the regulatory T-lymphocytes, which pacify immune responses and limit inflammation.

This shift in the ratio of stimulatory and regulatory cells appeared to have functional effects since the farm-reared piglets also exhibited decreased antibody responses to novel food proteins when they were weaned.

Regulatory T-cells have been identified in many mammalian species, including humans, and appear to be universal regulators of immune systems and a reduction in their numbers is often associated with the development of allergies, autoimmune and inflammatory diseases.

Dr Lewis explained: "At this point it is not clear exactly what caused the increased capacity for immune regulation in our farm-reared piglets. Our previous work suggests that intestinal bacteria play a pivotal role in the development of a competent immune system and these bacteria are obtained from the environment during early life."

The researchers suggest additional work is required to determine the extent to which other farm-associated factors, such as social and maternal interactions, aerial contaminants, antigens from bedding and early nutrition, contributed to the impact of the environment on increased local and systemic immune regulation.

Further clarification of the mechanisms underlying these interactions could lead to methods of intervention during infancy to prevent the development of immune diseases in later life.