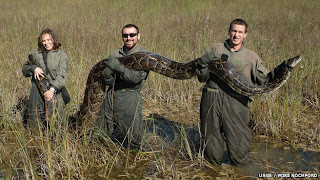 This is of course the worst possible scenario and it is a scenario that is also working itself out in all other favorable habitats in the southern .  It is just that they have not been noticed yet because their populations are still too low.

What makes it awful is that the creature lacks a natural predator even in its homeland.

It is also unlikely that extermination can succeed.  There will always be a reservoir somewhere.

That means of course that this is a task for wise and forward thinking legistlation.  Perhaps we can start here?

The python and the alligator are two serious wetland threats that both need to be brought under control through active human predation.  It needs to be determined what population levels can be tolerated and a few refugia need to also be established.  Then legal harvesting rights need to be established and assigned perhaps through auction.

The harvester will be expected to harvest a minimum weight in order to maintain his rights.  This weight will be set at a sustainable level in order to provide enough product to the harvester but also at a level able to allow a rapid recovery of the mammal population generally.

The product is clearly a newly legal trade in alligator skins and python skins as well as the meat of both animals.  Offal and bones will also be used in such a system for fertilizer.

There is certainly a market for the skins and the meat does have nascent market in .  What is certain is that a steady supply will bring prices down and also establish new markets. Reptile ranching has a huge upside in that it does not have feed input costs unless some individual learns that fattening them with soy feed perfects the taste somehow.

Animal rights types will scream of course, but they can do that in the middle of a lion pride also.

Pythons occasionally tackle alligators, which can end badly for both animals

A team studied road surveys of mammals in the before and after pythons became common.

Researchers found a strong link between the spread of pythons and drops in recorded sightings of racoons, rabbits, bobcats and other species.

The national park covers the southern 25% of the original - a region of subtropical wetlands that has been drained over the last century to reclaim it for human use.

The origins of Burmese pythons in south are unknown, but many were imported into the through the pet trade.

As the pythons have made it from captivity into the wild, the absence of natural predators has allowed populations to balloon. Intermittent sightings were recorded for 20 years before the snakes were recognised as being established across the in 2000.

The pythons are now established across thousands of sq km in southern . Although there are no accurate figures for how many there are, the numbers removed from the Everglades reached nearly 400 in 2009 and this has been increasing year-on-year (apart from a slight drop in 2010 due to a cold spell).

The pythons can grow to large sizes, this example weighed 73kg (162lbs)

"Any snake population - you are only seeing a small fraction of the numbers that are actually out there," said Prof Michael Dorcas, one of the study's authors, from in .

He told BBC News: "They are a new top predator in - one that shouldn't be there."

"We have documented pythons eating alligators, we have also documented alligators eating pythons. It depends on who is biggest during the encounter."

Earlier this month, Interior Secretary Ken Salazar announced that the was poised to approve a ban on importing Burmese pythons. But some observers remarked that the move was about 30 years too late.

Prof Dorcas and his colleagues looked at data on mammals found during roadkill surveys from 1993-1999, and on live and dead mammals encountered during nighttime road surveys from 1996-1997.

They then compared these results with similar data collected between 2003 and 2011, after the pythons were recognised as being established.

They found that observations of raccoons and opossums had dropped by about 99%. There had been a 94.1% fall in observations of white-tailed deer and an 87.5% decrease in sightings of bobcats.

No rabbits or foxes were seen during the more recent survey; rabbits were among the most common mammals in the roadkill survey between 1993 and 1999.

The majority of these species have been documented in the diet of pythons found in the . Indeed, raccoons and oppossums often forage at the water's edge, where they are vulnerable to ambush by pythons.

Observations of rodents, coyotes and panthers had increased slightly, but the overall number of sightings remained low.

The researchers also found that the declines in mammals coincided geographically with the spread of Burmese pythons. Mammal species are more common in areas where pythons have only been recently introduced, and are most abundant outside the snakes' current range.

Prof Dorcas said more research was needed to assess the impact of such large declines. But he added: "It's not unreasonable to assume that any time we have major declines in mammals like this it's going to have overall impacts on the ecosystem. Exactly what those are going to be, we don't know. But it's possible they could be fairly profound."

The ban on importing Burmese pythons has come after five years of debate and lobbying in . Florida's Democrat Senator Bill Nelson was among those who campaigned for a ban, unravelling the skin of a 5m-long Everglades python at a 2009 Senate hearing to make his point.

But reptile breeders and collectors had disputed that the tropical snakes posed much risk beyond south and argued that any ban would harm a multi-million dollar industry.

Although the ban will not reverse the situation in southern , where the reptiles are already established, Prof Dorcas said it could help prevent their spread to other suitable habitats in the , such as southern and south .

ScienceDaily (Jan. 30, 2012) — Precipitous declines in formerly common mammals in Everglades National Park in Florida have been linked to the presence of invasive Burmese pythons, according to a study by Michael Dorcas, an associate professor of biology at Davidson College, and colleagues. The research is published in theProceedings of the of Sciences.

The study, the first to document the ecological impacts of this invasive species, strongly supports that animal communities in the 1.5-million-acre park have been markedly altered by the introduction of pythons within 11 years of their establishment as an invasive species. Mid-sized mammals are the most dramatically affected, but some pythons are as large as 16 feet long, and their prey have included animals as large as deer and alligators.

"The magnitude of these declines underscores the apparent incredible density of pythons in Everglades National Park and justifies the argument for more intensive investigation into their ecological effects, as well as the development of effective control methods," said Dorcas, lead author of the study and author of the 2010 bookInvasive Pythons in the United States.

He continued, "Such severe declines in easily seen mammals bode poorly for the many species of conservation concern that are more difficult to sample but that may also be vulnerable to python predation."

The most severe declines, including a nearly complete disappearance of raccoons, rabbits and opossums, have occurred in the remote southernmost regions of the park, where pythons have been established the longest. In this area, populations of raccoons dropped 99.3 percent, opossums 98.9 percent and bobcats 87.5 percent. Marsh and cottontail rabbits, as well as foxes, were not seen at all.

The researchers collected their information via repeated systematic night-time road surveys within the park, counting both live and road-killed animals. Over the period of the study, researchers traveled a total of nearly 39,000 miles from 2003 to 2011 and compared their findings with similar surveys conducted in 1996 and 1997 along the same roadways before pythons were recognized as established in .

The authors suggested that one reason for such dramatic declines in such a short time is that these prey species are "naïve" -- that is, they not used to being preyed upon by pythons since such large snakes have not previously existed in that ecosystem.

"It took 30 years for the brown treesnake to be implicated in the nearly complete disappearance of mammals and birds on Guam; it has apparently taken only 11 years since pythons were recognized as being established in the Everglades for researchers to implicate pythons in the same kind of severe mammal declines," said Robert Reed, a USGS scientist and co-author of the paper. "It is possible that other mammal species, including at-risk ones, have declined as well because of python predation, but at this time, the status of those species is unknown."

Another coauthor of the study was John Willson '02, a research scientist at who has worked with Dorcas on several studies, and co-authored the book Invasive Pythons in the .

Willson commented, "Our research adds to the increasing evidence that predators, whether native or exotic, exert major influence on the structure of animal communities. The effects of declining mammal populations on the overall ecosystem, which extends well beyond the national park boundaries, are likely profound, but are probably complex and difficult to predict. Studies examining such effects are sorely needed to more fully understand the impacts pythons are having on one of our most unique and valued national parks."

On January 23 the Fish and Wildlife Service published a rule in the Federal Register that will ban the importation and interstate transportation of four non-native constrictor snakes that threaten the , including the Burmese python. These snakes are being listed as injurious species under the Lacey Act.