Putin's Quest For a Modern Economy 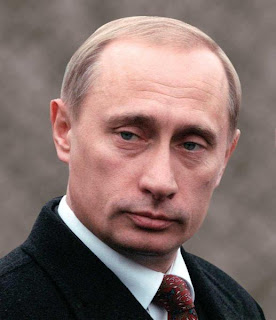 This is a remarkably sober assessment of today and a clear defining of the counter economic force of corruption.  Plainly, Putin is moving toward a true systemic reform.  This comes after years of careful consolidation of the state’s power lost largely through the collapse and its aftermath.

If he is elected and he carries through on the elimination of systemic corruption then will soon be well on the way to been a high growth economy independent of the resource crutch that has sustained the state to date.

Oddly it is the right time to do this.  A generation has passed and today has the bulk of its working force schooled in the post Soviet world.  They are ready to perform if given a chance.

As an old investor the country has made the transition from watch only to begin to dabble.  A new sense of ethics will make for excellent business opportunities.  Before now, you could only count on been robbed.

's quest for a modern economy

We are living through a period of serious changes in the world economy. Never before has technology advanced so quickly. What we see today would have seemed like science fiction just 15 years ago.

In such circumstances, it is important to ensure stable development, to give our citizens maximum protection from the impact of global crises while renewing all aspects of our economy. For , it would be inadmissible not to have an economy that can guarantee stability, sovereignty and a decent standard of living.

We need an economy with competitive industries and infrastructure, a developed service sector and an effective agricultural system – in short, an economy that harnesses modern technology. Fostering competition is key to securing demand for innovation. Only competition can encourage private business to seek enhanced technologies and innovate their products.

To restore our technological leadership, we must choose our priorities carefully. We should look at sectors such as pharmaceuticals, high-tech chemicals, composites and non-metal materials, the aviation industry, information and communication technologies and nanotechnologies.

The experiences of countries such as and that have successfully modernized their economies show that a push from the state is necessary. We are also counting on the active participation of Russian capital in the privatization and further development of high-tech assets. At the same time, it is necessary to find buyers in global investment circles who are ready not only to invest in an individual scientific production facility, but to bring in their connections and experience on the international markets.

What is important is to get market leaders in global technology to move from the initial stage where Russia is perceived as a promising market to the second stage, where they start investing in local production facilities, and the third stage, where new processes and products would be designed in Russia.

To encourage this, we need to expand our domestic market, making it more attractive for direct investment. In recent years, we have moved from declarations of intent to real integration by creating the Customs Union with and , the single economic space and the free-trade zone with CIS countries. has been consistently working toward establishing a single market with its neighbours.

We must improve ’s business climate and its attractiveness for long-term investment. Both remain dissatisfactory. In the past few years, on the initiative of President Dmitry Medvedev, we launched a series of reforms aimed at improving the business climate. Until now, however, no significant change has occurred.

Speaking plainly, we still have system-wide corruption. The cost of doing business varies depending on your “proximity” to specific individuals within the government machinery. In these conditions, entrepreneurs quite rationally tend to find backers and strike deals with them rather than observing the law. Then, having made their deals, such businesses try to suppress competition.

Clearing the way for businesses prepared to win a competitive battle on a level playing field is our fundamental system-wide goal. And this cannot be attained through economic policy alone. We must transform the state itself, its executive and judiciary branches. We must dismantle the accusation-driven collection of law-enforcement, investigative and judiciary agencies and eliminate from our legislation all vestiges of the Soviet legal system. Economic cases must be transferred from trial courts of general jurisdiction to arbitration courts. Together with the expert community, judges and entrepreneurs, we should publicly discuss and introduce before the end of this year all the necessary initiatives to achieve this.

Economic policy must be adjusted to reduce the level of government regulation, replacing regulations with market-based mechanisms, and administrative control with liability insurance. The global crisis lent more credibility to the proponents of state-led management of the economy. But we understand that, as opposed to many other countries, the share of the state in the Russian economy and the degree of government regulation remains rather high.

We have plans to privatize a number of key assets. I should emphasize that such privatization is structural, rather than fiscal, in nature. In other words, we are selling not only to obtain additional budget revenue but, above all, to boost the competitiveness of our economy and clear the way for private initiatives. We will not ignore the market environment and sell cheap.

We should also reduce the participation of state-owned companies and banks, as well as that of natural monopolies, including Gazprom, in the capital of other economic players, and spin off their non-core businesses, including media holdings.

And we must eschew protectionist measures. We will soon join the World Trade Organization. Excessive protectionism always leads to stagnation, poor quality and high prices.

We have the key drivers for success in place. Russia now has a rapidly growing middle class prepared to invest in better medical services, better housing and higher retirement benefits. The task of the government is to make sure their money doesn’t go up in flames.
The modernized economy should grant everybody the possibility of self-fulfilment – entrepreneurs, public officials, engineers, skilled workers.
Vladimir Putin is Prime Minister of .