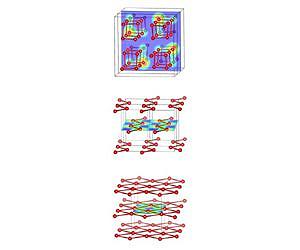 It would be rather nice to actually produce and contain the suggested pressures.  Here we are modeling them to learn of their characteristics and of course there may always be error or a failure of theory.  I am keen to know a lot about carbon under similar pressures.

As interesting, I would love to know something certain about the nature of the Earth’s core as I am also fairly sure we get none of it transported up into the upper crustal zone.

The assumption even of the massive pressures we expect may not hold up so well.  Recall diamonds come from a mere eighty miles down.

This is all important to our understanding of Earth science and the actual structure of the planet, yet it has all been built on a system of assumptions and extrapolations that appear reasonable but remain untestable.

More recent thoughts on the nature of gravity allows me a broader perspective and even the idea of a hollow planet which appears preposterous may not be dismissed out of hand.  All this again begs the question of ’what is gravity?’

Structures of solid oxygen under high pressure: At 1.9 TPa, oxygen polymerizes and assumes a square spiral-like structure, which is semi-conducting (top). With increasing pressure, the polymer exhibits metallic properties (zig-zag chain-like phase, mid). Then, the structure changes into a metallic layer phase (bottom). The coloured areas represent the charge density in one layer of the structure. Image courtesy Jian Sun.

Using computer simulations, a RUB researcher has shown that the oxygen molecule (O2) is stable up to pressures of 1.9 terapascal, which is about nineteen million times higher than atmosphere pressure. Above that, it polymerizes, i.e. builds larger molecules or structures.

"This is very surprising" says Dr. Jian Sun from the Department of Theoretical Chemistry. "Other simple molecules like nitrogen or hydrogen do not survive such high pressures."

In cooperation with colleagues from , the of , and the NationalResearch Council of , the researcher also reports that the behaviour of oxygen with increasing pressure is very complicated. It's electrical conductivity first increases, then decreases, and finally increases again. The results are published in Physical Review Letters.

The oxygen atoms in the O2 molecule are held together by a double covalent bond. Nitrogen (N2), on the other hand, possesses a triple bond. "You would think that the weaker double bond is easier to break than the triple bond and that oxygen would therefore polymerize at lower pressures than nitrogen" says Sun. "We found the opposite, which is astonishing at first sight."

However, in the condensed phase when pressure increases, the molecules become closer to each other. The research team suggests that, under these conditions, the electron lone pairs on different molecules repel one another strongly, thus hindering the molecules from approaching each other.

The many structures of oxygen

At high pressures, gaseous molecules such as hydrogen, carbon monoxide, or nitrogen polymerize into chains, layers, or framework structures. At the same time they usually change from insulators to metals, i.e. they become more conductive with increasing pressure.

The research team, however, showed that things are more complicated with oxygen. Under standard conditions, the molecule has insulating properties. If the pressure increases, oxygen metallises and becomes a superconductor.

With further pressure increase, its structure changes into a polymer and it becomes semi-conducting. If the pressure rises even more, oxygen once more assumes metallic properties, meaning that the conductivity goes up again. The metallic polymer structure finally changes into a metallic layered structure.

"The polymerization of small molecules under high pressure has attracted much attention because it helps to understand the fundamental physics and chemistry of geological and planetary processes" explains Sun. "For instance, the pressure at the centre of Jupiter is estimated to be about seven terapascal.

It was also found that polymerized molecules, like N2 and CO2, have intriguing properties, such as high energy densities and super-hardness." Dr. Jian Sun joined the RUB-research group of Prof. Dr. Dominik Marx as a Humboldt Research Fellow in 2008 to work on vibrational spectroscopy of aqueous solutions. In parallel to this joint work in "Solvation Science" he developed independent research interests into high pressure chemical physics as an Early Career Researcher.