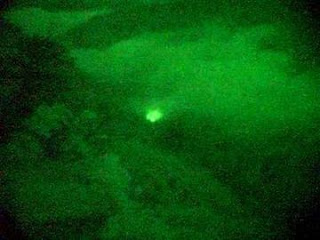 First of all, the Brown lights are important because they are continuously repeated.  This is not intelligent activity. It is natural bobbing and weaving in the presence of high altitude air streams.  Air clarity and natural luminescence combine to actually reveal these lights.

Importantly, it partially conforms to the established behavior of UFOs but not entirely at all.  A UFO clearly demonstrates intelligent control and velocities that are unnatural to put it mildly.

It does give clear credence to my speculations on the swamp gas phenomena.  This is a recent insight of mine, driven by the discovery of odd gels in the grass in after a rain fall.

I made the conjecture that a methane capturing slime mold is behind all this.  It provides the necessary lighter than air lift for the colony to float up into the atmosphere and more critically to the stratosphere above violent air flows. No other obvious scheme allows swamp gas or methane to concentrate and lift into the sky.  Whoever came up with the idea actually knew of what he spoke.  It would be really annoying if there is an appropriate paper buried deep in the archives.

These lights clearly take advantage of a stable air mass at high altitude and may well capture solar radiation at that height, but that needs to be confirmed.

What is most important here is that this is a singular source of UFO like activity that can be repeatedly observed and studied without the nonsense of discussing the credibility of witnesses.

Symposium delves into cause of phenomenon
Related

No matter how they try, scientists ranging from paranormal investigators to serious physicists are unable to unlock the mystery of the Lights in .

“Artists and scientists alike have congregated around this phenomena,” said Joshua P. Warren, Asheville native turned paranormal investigator who spoke before a crowd of 120 Saturday at city hall at a symposium on the Brown Mountain Lights.

The Brown Mountain Lights, which can be seen from several vantage points along the Blue Ridge Parkway and the Brown Mountain Overlook on North Carolina Highway 181, have been explained as a series of orange-like orbs by those who claim to have seen them.

Stories surrounding the lights range from Indian legends about former slaves to UFO and military activity.

“The thing that makes the Brown Mountain Lights so great is that it is a blank slate upon which you can project your imagination, your dreams, your visions,” said Warren, who has made guest appearances on the National Geographic and Discovery channels, among others.

One theory posited to the audience that may explain the phenomena is that water flowing through causes the land to act as a capacitor, a natural conductor of electricity. Tannic acid that runs through the water may create a significant charge that releases light.

said the best time to view the lights is possibly during November when leaves are off the trees and there is a dramatic change in temperature from day time to night time.

However, Dan Caton, professor of physics at Appalachian , stated there is no proof that visiting at a certain time of year will make the lights more visible. He also disputed ’s science and said that there simply has not been enough recorded, scientific data to determine either the origin of the lights or why they occur.
Despite absence of scientific explanation surrounding the lights, audience members attended the event with photos and stories of their own to share.

Burke County Director of Tourism, Ed Phillips, said his office gets so many questions from the public about the lights he thought bringing in two experts who know about them might help generate some answers.

“My job is to find unique things about and promote them, and this certainly qualifies as one,” he said. “They’re real. Thousands and thousands of people have seen them. And there is something creating these lights.”

The lights are described as balls of light that move at various speeds. The first published account of the lights appeared in 1913 in the Charlotte Daily Observer and chronicles the Morganton Fishing Club’s sightings.

Explanations include headlights from locomotives and cars, moonshiners signaling each other, phosphorescence from decaying stumps and logs, radium emanations and chemical reactions. Others believe the lights are similar to St. Elmo’s Fire — an electrical phenomenon — or the Andes light of .
The Geological Survey has twice undertaken an investigation of the lights. The first investigation in 1913 concluded the lights were reflections from locomotive headlights.
In 1922, the second USGS investigation concluded the lights were caused by the spontaneous combustion of marsh gasses. The mountains create a basin-like area and air, of different temperatures and densities, move into the basin creating a unstable conditions and the lights.

Perhaps it would benefit you to read the definition of UFO.

From the Wiseman's View on Linville Mountain the lights can be seen well. They at first appear to be about twice the size of a star as they come over Brown Mountain. Sometimes they have a reddish or blue cast. On dark nights they pop up so thick and fast it's impossible to count them.

this is important information. the darkness allows biological luminescence to be seen. Thus i suspect we are really looking at a natural generator of my posited slime mold baloons filled with methane. The evidence certainly conforms fully.