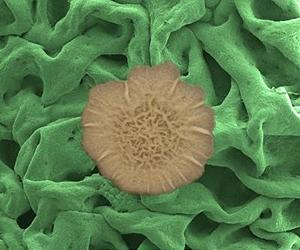 Biofilms appear to be getting better understood.  We learn the cells take advantage of osmosis to do the job of colonizing a surface.  One develops respect for this process which also is fundamental to a lot of damaging processes including tooth decay.

These could well be precursors in evolution to the development of slime moulds.

The Mighty Mesh Of Biofilms

Top view of a Bacillus subtilis colony in conditions where extracellular matrix is produced, leading to biofilm formation.

New research at Harvard explains how bacterial biofilms expand to form slimy mats on teeth, pipes, surgical instruments, and crops. Through experiment and mathematical analysis, researchers have shown that the extracellular matrix (ECM), a mesh of proteins and sugars that can form outside bacterial cells, creates osmotic pressure that forces biofilms to swell and spread.

The ECM mechanism is so powerful that it can increase the radius of some biofilms five-fold within 24 hours.

The results have been published in the Proceedings of the of Science.

Biofilms, large colonies of bacteria that adhere to surfaces, can be harmful in a wide range of settings, resulting in tooth decay, hospital infections, agricultural damage, and corrosion. Finding ways to control or eliminate biofilms is a priority for many industries.

In order for a biofilm to grow, a group of bacterial cells must first adhere to a surface and then proliferate and spread. When a vast number of cells are present, this can translate into the creation of a filmy surface spanning several meters.

"Our work challenges the common picture of biofilms as sedentary communities by showing how cells in a biofilm cooperate to colonize surfaces," says lead author Agnese Seminara, a research associate at the Harvard School of Engineering and Applied Sciences (SEAS).

Several types of biofilms have been characterized based on composition and antibiotic resistance, but until now it has not been clear what roles the whip-like flagella and the ECM play in the outward movement of cells.

While the presence of a flagellum has traditionally been associated with greater movement capability, the new research has found that a flagellum actually confers little advantage in the formation of biofilms. In the Harvard study, mutant bacteria lacking flagella were able to spread at almost the same rate as the wild-type (natural) ones. Mutants that could not secrete the ECM, however, showed stunted growth.

The team of physicists, mathematicians, chemists, and biologists examined the formation of biofilms in Bacillus subtilis, a type of rod-shaped bacteria often found in soil. Their focus on this particular species was led by Roberto Kolter, Professor of Microbiology and Immunobiology at

"This project establishes a link between the phenotype, the physically observable traits of biofilm growth, and the genetic underpinning that allows spreading to happen in B. subtilis," notes co-principal investigator Michael Brenner, the Glover Professor of Applied Mathematics and Applied Physics at SEAS.

The researchers had speculated about a possible connection between the biofilm's quest for nutrition and the process of spreading. Because biofilms absorb nutrients through their exposed surface area, they can only swell vertically to a certain point before the surface-area-to-volume ratio makes it impossible to adequately nourish every cell.

At this point, the biofilm must begin to spread outward so that the surface area increases along with the number of cells.

The ECM, a complex mesh of proteins, sugars, and other components outside of the individual cells, holds the key to one aspect of this movement: it apparently increases osmotic pressure within the biofilm.

In response to the increased pressure, the biofilm immediately absorbs water from its surroundings, causing the entire mass to swell upward. The final change in the shape of the biofilm is due to a combination of this swelling and the horizontal spreading that follows.

Seminara and Brenner created a mathematical model that mirrored many of the team's physical observations. The model supported the experimental observations; by considering the relationship between swelling and spreading, they were able to find the "critical" time at which horizontal outward motion begins.

"This work is led by theoretical predictions which were tested by experiment and proved to be correct," reflects co-principal investigator David Weitz, Mallinckrodt Professor of Physics and Applied Physics at SEAS and Co-Director of the BASF Advanced Research Initiative at Harvard. "

The results also demonstrate how simple physical principles can provide considerable insight into the behavior of biofilms."

The motion of biofilms represents only a small part of a complex subject. Further research will investigate how biofilms adapt and possibly manipulate their environment. The ultimate goal is to alter biofilms' behavior to minimize their harmful effects.

"The natural question at this point is: do cells actively control biofilm expansion and can they direct it toward desired targets?" says Seminara. "This is a first step toward understanding the striking evolutionary success of these ubiquitous organisms, and it may open the way to unconventional methods of biofilm control."

Seminara, Brenner, and Weitz worked with Thomas Angelini, an Assistant Professor at the University of Florida and a former member of the Weitz lab; James Wilking, a SEAS research associate in applied chemistry; Senan Ebrahim '12, an undergraduate at Harvard; and Hera Vlamakis and Roberto Kolter of Harvard Medical School.