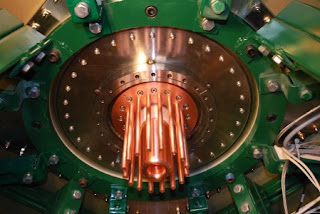 This recent report from Focus Fusion continues to show great progress.  Here they have learned how to manage the size of the plasmoid itself which will be critical in order to work with increased densities.  It is always important to find some way to vary the parameters.

I was unable to attach the pictures from the report so it will be necessary to go to the Lawrenceville site itself to see them.  What is different is the introduction of a coil around the plasmoid.

This is all great progress and this continues to be the ultimate fusion project able to power starships and everything else with direct power in the form of electron flow.

But how can one reliably control a tornado with a butterfly? First, you need a system that magnifies the effect of the butterfly’s wings. In FF-1, the magnetic coil—our butterfly—wrapped around the inside of the vacuum chamber, produces a small vertical magnetic field. This magnetic field pushes the main current of the device, moving inwards from the outer electrode, very slightly to the side – perpendicularly, creating a slight circular motion of the current. This circular motion of the mighty main electric current in the same direction as the coil’s current increases the vertical magnetic field. This stronger field then pushes the current ever more strongly to the side, leading to exponential growth of the vertical field and the circular current as depicted on Figure 2. This is the magnifying instability process, similar to the way a tiny swirl in the still water of a sink produces a fast-spinning vortex when the plug is pulled. It is also closely related to the non-magnetic process by which meteorological tornadoes form.

Left: the copper electrodes mounted onto the FF-1 before the vacuum chamber is added. The outer 16 rods are the cathodes and the thick inner anode is in the center. These are the FF-1’s “main electrodes” where main electric currents converge toward the hole in the anode. 3

Figure 2. As the main current (white) in FF-1 flows inward to the central electrode (anode), the magnetic field generated by the AFC (not shown here) pushes the current in a circular direction (yellow arrows), creating a stronger field and more push, allowing a tiny current to control a huge one.

To control the process, however, you need to get rid of all but one of the butterflies in the system. This is not practical for weather control, but is possible in a small vacuum chamber. LPP researchers have been working hard since August to reduce ―accidental butterflies by carefully eliminating any sources of random asymmetry that could set in motion unwanted circular currents. For example, FF-1’s electrodes are now centered on their shared axis to an accuracy of a thousandth of an inch.

The aim of all this effort is to add more spin—angular momentum—to the magnetic vortex that compresses the gas down to form the tiny plasmoid, the dense ball of plasma (electrically conducting gas) that heats up to produce fusion reactions. (Click for animation). This idea was first proposed in 2005 by LPP research team member Aaron Blake, and is protected by LPP’s patents in the and . With more spin, the plasmoid can grow bigger, engulfing more plasma and thus producing more reactions.

However, too much spin will prevent full compression, so the amount of spin added has to be carefully controlled.

The December 21st result dramatically shows this control. As the team varied the current in the AFC between zero (turned off) and 4.5 amps, the high-energy x-rays produced by the plasmoid changed by over a factor of ten (Figure 3), peaking when the AFC was at a current of 4.0 amps. The x-rays were measured with a Near Time-of-Flight instrument, referred to as NTF, which was shielded by 6 mm thick copper filter. This filter allowed only highly energetic, penetrating x-rays that were generated by electrons hotter than 100 keV (kiloelectron-Volts, equivalent to 1.1 billion degrees C) to pass through to the NTF, and absorbed less energetic ones. 4

The data shows that for the narrow range of AFC from 3.5-4 amps, the plasma is being heated much hotter than for other settings. Most significantly, the difference in x-ray yield between the average of the shots at 4 amps and those at zero amps is 15 times greater than the random variation of yield between the two shots at 4 amps. This allows great confidence that the effect observed is real, even though only two shots were taken at each setting in this particular series of tests.

Fusion reactions were also enhanced by the AFC (Figure 4), although by a factor of 2, not 10. The difference in fusion yield between the 4-amp and zero-amp settings is still four times as much as the variation in yield between the two shots at 4 amps, indicating a significant effect. The greater enhancement of x-rays from the electrons shows that the electrons were both hotter and the plasmoid was larger, while the fusion reactions were only increased by the size of the plasmoid, as predicted by LPP’s theory.

The ability to control the spin of FoFu-1’s magnetic tornado will be crucial in future experiments, when the density of the gas is increased to generate far higher fusion yields, and more spin is required for the denser, slower-moving plasma. LPP’s team then expects to see even more dramatic results from our magnetic butterfly. 5

This December, LPP compiled a data archive covering the first two years of operation of FF-1, from October 2009 to October 2011. Preliminary analysis of this data has revealed that at least for a 30-shot series in September-October 2011, electrons were being consistently heated to above 400 keV (4 billion degrees C), more than twice as hot as the ions are heated in our hottest shots. (FLASHBACK: Find discussions of ion energy earlier in 2011 here). X-rays from such super-hot plasma can be used for LPP’s spin off technology, X-Scan, for non-destructive inspection.

Earlier in the fall of 2011, we had performed experiments to measure the spectrum of the x-rays. We know that the more energetic the x-rays we have, the hotter the electrons that must have produced them. On Sept 27-Oct 5, we had placed an additional filter in front of the NTF, so it had 6 mm of total copper thickness, while the FTF, Far Time of-Flight, continued to have the 3 mm thick filter. The copper filter acts on the x-rays the way a colored glass filter acts on light, blocking less energetic x-rays and allowing more energetic ones to pass. Just as a glass filter that blocked red light and allowed blue to pass would show a brightening as a metal rod was heated from red-hot to white-hot, the 6mm copper filter allows us to measure how ―hot‖ (that is, energetic) the x-rays are. We can do this by comparing the amount of x-rays that pass through the 6 mm filter with those that only pass the 3 mm one. Now that we have the archive and the calibration curve, we can go back and compare these 30 shots taken when the NTF and FTF had different filters with those taken when both devices had the same filter. 6

We found that no significant difference in the ratio of the NTF to FTF signals occurred because of the filter. The x-rays were acting as if the 3 mm copper was transparent. This could only be the case if the x-rays were produced by electrons that had an average energy of at least 400 keV. We are eager to analyze more shots for the electron temperature, which is crucial for heating the ions and thus overall fusion yield. Thanks to LPP’s IT Consultant, Ivana Karamitsos, for archiving, software tweaks, and data analysis collaboration!
Posted by arclein at 12:02 AM