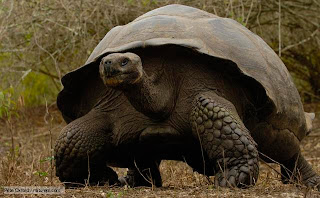 This is a neat development in which a lost giant tortoise species haws been identified living within another extant population in a nearby island.  Restoring the original population appears to be very promising here.

These giant tortoises were central to the work of Charles Darwin and have certainly influenced every biology student since.  It is great to discover that a lost page in that story is alive and well.

I do anticipate that the great global mission of young biologists for the next two centuries will be the reclamation of lost species on islands everywhere through recovering DNA and using surrogate mothers.  We can almost do this now and will apparently soon recover the Pleistocene menagerie through exactly this method.

Far easier may be the extraction of DNA from more recently collected samples.  That is one thing the nineteenth century expansion of science did accomplish, and every museum was filled with appropriate material.

Island refugia allow the creation of pristine nurturing conditions for these efforts once you have removed the imported nasties such as rats.

A few survivors of a giant Galapagos tortoise species thought to have gone extinct in the 1840s may still exist on a volcanic island in the Pacific, genetic analysis reveals.

Researchers did DNA testing of 1,600 tortoises on Isabela Island in the Galapagos and found at least 84 animals who were the direct offspring of a different tortoise species from nearby long believed gone.

"This is some of the most exciting news that I've seen for the Galapagos in a long time," says Linda Cayot, science adviser to the Galapagos Conservancy of "To have a species that was thought to be extinct in the middle of the 1800s come back is amazing."

Galapagos giant tortoises are famous as one of the species that helped Charles Darwin develop his theory of evolution. When he visited in 1835 discovered that many of the islands in the remote Pacific islands west of were home to their own, distinct, tortoise species. Each differed slightly from those on nearby islands. His theory of evolution helped explain how each species had evolved to survive best in its home island.

One of the species he described was Chelonoidis elephantopus, which lived on . Within a decade after his expedition left, whalers had killed them all off for food.

Now researchers have found DNA evidence that purebred Floreana tortoises must be living on among a population of its native Chelonoidis becki species. The researchers think there could potentially be 38 or more of the Floreana among an estimated 8,000 or so Isabela tortoises. Their paper is in Monday's edition of the journal Current Biology.

The discovery dates back to 1994 when the same researchers took 60 blood samples from tortoises living on the sides of rocky and forbidding Wolf volcano on Isabela. But what lay locked in the DNA of some of the samples was surprising.

"We found some individuals that were so divergent genetically that we called them 'aliens,' " says Adalgisa Caccone, an evolutionary biologist at in and senior author on the paper.

Years later, as techniques for doing DNA analysis improved, they did tests of bone and shell from extinct Galapagos tortoise species kept in museums, and discovered just where these "aliens" came from — now tortoise-less Floreana Island.

The researchers believe that some of the tortoises taken by whalers onboard their ships to be stored as food must have been dropped or escaped and made their way to Isabela, which has no water source and so was never settled by humans.

To find out for sure, this year one of the largest biological expeditions in Galapagos history went back to Isabela, where 50 people spent two weeks taking blood samples from 1,600 tortoises until they literally ran out of sample tubes.

They took blood samples from 1,669 tortoises, about 20% of the island's population.

Just in case you were wondering how you get blood from a 400 pound tortoise, you flip it on its back and one or two strong people pull one of its front legs out of its shell so a tiny blood sample can be taken from the equivalent of the animal's elbow.

"Flipping them isn't so tricky, for that you use leverage. It's getting their leg to extend that's hard," Caccone says. That can take two grown men — these tortoises are strong, she says.

Returning to the lab, the researchers found that of the 1,669 samples, 84 were Floreana/Isabela hybrid individuals. And the matings were recent, at least 30 of the hybrids were less than 15 years old.

"The only way these hybrids could be produced is if we had some pure Floreana animals still alive on the island… because some of these animals are hybrids which are first-generation crosses," Caccone says.

While it might seem unlucky that the researchers didn't find one of the purebred individuals, "they were very lucky" to have found evidence that they were there and reproducing, says Oliver Ryder at the University of California San Diego's Center for Reproduction of Endangered Species.

The researchers plan to hold a workshop this year in the Galapagos to discuss what can be done now and then send an expedition back in December of 2012 to look for the pure Floreana tortoises.

The giant tortoises are crucial to the ecosystems of their islands, Caccone says. For example, the highly endangered prickly pear cactus that grows on them can only sprout after its seeds have gone through the gut of one of them.

It's even possible that some of the Floreana tortoises living on Isabela Island are the children of ones saw, 's Ryder says. These species are known to live to 100 and beyond, he says. "The direct offspring of animals alive in 1840 could still be alive."