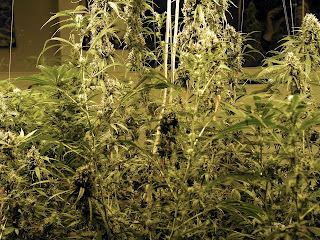 We learn that there are two active ingredients and that one is producing psychotic symptoms and the other is not.  I am not too sure where any of this goes as nothing is said about the individual effects that might drive usage.

It is still intriguing and must lead to a separation of the two components in terms of future drug testing and perhaps the elimination of prohibition for one element at least.

At least we are now seeing some science progressing in the field. The science has been stalled for decades because of prohibition.

ScienceDaily (Jan. 2, 2012) — Different ingredients in marijuana appear to affect regions of the brain differently during brain processing functions involving responses to certain visual stimuli and tasks, according to a report in the January issue of Archives of General Psychiatry, one of theJAMA/Archives journals.
http://www.sciencedaily.com/releases/2012/01/120102180854.htm

Sagnik Bhattacharyya, M.B.B.S., M.D., Ph.D, at the Institute of Psychiatry, King's College in London, and colleagues studied 15 healthy men, who were occasional marijuana users, to examine the effects of Δ9-tetrahydrocannabinol (Δ9-THC) and cannabidiol (CBD) on regional brain function during salience processing, which is how people perceive things around them.

The authors used functional MRI images to study each participant on three occasions after administration of Δ9-THC, CBD or placebo. Study participants performed a visual oddball task of pressing buttons according to the direction arrows on a screen were pointing, as a measure of attentional salience processing.

"Pairwise comparisons revealed that Δ9-THC significantly increased the severity of psychotic symptoms compared with placebo and CBD whereas there was no significant difference between the CBD and placebo conditions," the authors conclude.

Δ9-THC had a greater effect than placebo on reaction time to nonsalient relative to salient stimuli. This was associated with modulation of both prefrontal and striatal function by Δ9-THC, augmenting (increasing) activation in the former region and attenuating (weakening) it in the latter.

"Moreover, in the present study, the magnitude of Δ9-THC's effect on response times to nonsalient stimuli was correlated with its effect on activation in the right caudate, the region where the physiological effect of Δ9-THC was linked to its induction of psychotic symptoms," the authors write.

They conclude that "collectively, these observations suggest that Δ9-THC may increase the aberrant attribution of salience and induce psychotic symptoms through its effects on the striatum and lateral prefrontal cortex."

When the effects of CBD were contrasted with Δ9-THC and placebo with respect to the visual task there was a "significant effect" in the left caudate with CBD augmenting (increasing) the response and Δ9-THC attenuating (weakening) it.

"These effects suggest that CBD may also influence the effect of cannabis use on salience processing -- and hence psychotic symptoms -- by having an opposite effect, enhancing the appropriate response to salient stimuli," the authors wrote.
Posted by arclein at 12:01 AM