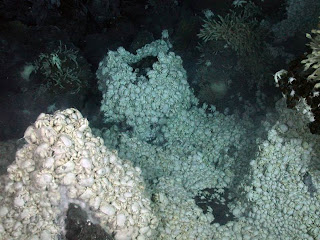 What appears curious here and unexpected really is that the vent life is so different.  The ocean temperature in the deep is naturally at a couple degrees of freezing just about everywhere and one assumes that would hold true in the Antarctic.  For that reason biological transport seems a given, yet here we find contrary evidence.

This clearly unexplained, but it does strongly indicate that it is not so easy for life to use Antarctic waters as a connector to other parts of the ocean.  Perhaps these strange groupings are unique to this area and it is simply an anomaly generated by biological good luck and means little in terms of the general movement throughout the ocean.

In the meantime, this story seems top have grabbed its share of popular notice and that should assure us of a lot of follow up. 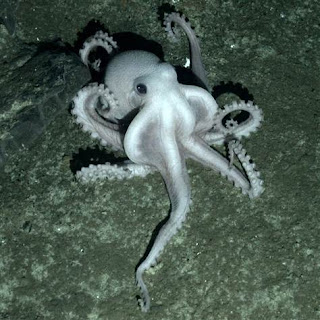 A new species of yeti crab piles around the hydrothermal vents in . The vents may be a safe haven for the crabs.

Scientists doing their first exploring of deep-sea vents in the Antarctic have uncovered a world unlike anything found around other hydrothermal vents, one populated by new species of anemones, predatory sea stars, and piles of hairy-chested yeti crabs.

It was "almost like a sight from another planet," said expedition leader Alex Rogers, a professor of zoology at .

Even in the eye-popping world of deep-sea vents, the Antarctic discoveries stand out, with the unfamiliar species of crabs found crowded in piles around the warm waters emanating from the seafloor. Many of the animals found at the vents have never been found at hydrothermal vents in other oceans, said. "To see these animals in such huge densities was just amazing," told LiveScience.

In the dayless world of deep-sea vents, energy comes not from the sun but from the hydrothermal energy generated in the oceanic crust.

The yeti crabs seem to cultivate "gardens" of bacteria on their chests, which are covered with hairy tendrils. These bacterial mats almost certainly provides the crabs with sustenance, said. In turn, predatory seven-armed sea stars stalk the periphery of the vents, snacking on unfortunate crabs. [See videoand photos from the vents]

"We were absolutely stunned to see the animal communities, because they were so different from the hydrothermal vents seen elsewhere," told LiveScience. He and his colleagues reported their results Jan. 3 in the journal PLoS Biology.

Discovery in the deep sea

Weird life flourishes at deep-sea vents the world over, but no one had ever found hydrothermal vents in Antarctica, explained Jon Copley, a professor of earth and ocean science at the who also participated in the research. That's largely because it's more difficult to do research in the harsh Southern Ocean than in temperate climes. [Extremophiles: World's Weirdest Life ]

"It's only quite recently that we've been able to be bold enough, really, to head to the poles," Copley told LiveScience.

In 1999, Antarctic mapping surveys turned up hints of hydrothermal vent output in the water column over the East Scotia Ridge in the Atlantic section of the Southern Ocean, between Antarctica and and eastward. It took 10 years for researchers to get back for a full-blown expedition, during which they lowered cameras to two areas, 8,530 feet and 7,874 feet deep, catching the first glimpses of Antarctic hydrothermal vents. Among them were "black smokers," chimney-like vents that emit dark-hued, superheated water.

Although the background temperature of the Southern Ocean in the area is 32 degrees Fahrenheit, the black smokers gushed water as hot as 721 degrees F.

In 2010, the researchers returned with a remote-operated submersible vehicle (ROV) called . The sub took close-up photos of the amazing vent fauna and collected samples of organisms for identification.

Among the new species were the yeti crabs, crowded around the vents up to 600 per square meter.

"They're literally, in places, heaped up upon each other," said. Crabs normally don't tolerate cold temperatures well, so the vents may be a warm haven for these crabs, Copley said.

The expedition spotted this pale octopus on the Antarctic seafloor.

Unlike vents in other oceans, the Antarctic vents lack tube worms,mussels and shrimp. Instead they harbor new species of barnacles and anemones, as well as a large brown spiral-shelled snail. The researchers even saw ghost-pale octopuses, which seemed drawn to the lights of the ROV.

"We were completely blown away by what we found," Copley said. "I've worked at vents in the Atlantic, the Pacific and the , but these are the lushest, richest vents, in terms of life, that I've come across."

The discovery helps fill a gap in researchers' understanding of how deep-sea life disperses around the oceans, said. They had expected that the Southern Ocean would be a historical gateway for vent species to travel between the Atlantic, Pacific and Indian oceans, and there do seem to be some species, such as the yeti crab, that are related to species found at other vents. Those relationships seem to reach back into geological history, Copley said, when there was a connection between the Antarctic and the eastern Pacific.

But the vast differences between Antarctic vents and vents found elsewhere suggest that the area is not a gateway but a biological region in its own right, said. The cold Antarctic waters may act as a barrier to species that start their lives as swimming, feeding larvae, he said. On the other hand, larvae that carry their own food supply with them in eggs — known as lecithotrophic larvae — may be able to survive and disperse in the chilly Southern Ocean.

As humans increasingly exploit the deep seas for fish, oil and mining, understanding how species are dispersed is crucial, Copley said.

"Until we understand what governs the patterns of life at deep-sea vents, how interconnected their populations, how well life disperses from vent to vent, we can't make responsible decisions about how to manage these deep-ocean resources."